We love Shaky Knees – for many reasons: Great location, great setup, great spectrum of music. This was our third Shaky Knees out of its five years existence. This year the festival returned to Centennial Park, in the heart of downtown Atlanta, and the festival has hit its stride in overall experience. 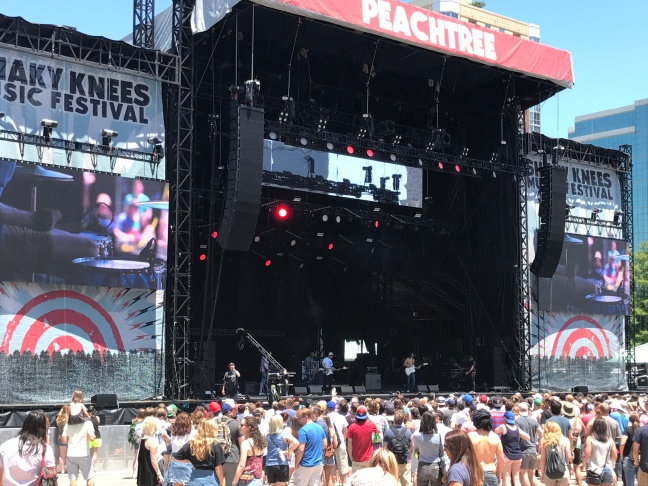 First, the location is perfect for a ‘city’ festival. As an out-of-town traveler to the Festival, there are plenty of hotel options all in walking distance. We love the fact that we can park our car at the hotel and not touch it all weekend. For those from ATL, there plenty of parking options for easy access to the festival grounds.

This year, Festival planners made a smart decision to downsize from five stages last year to three stages this year. This made a big-positive difference in the overall experience. This eliminated the bridge over Marietta St., which last year was a major clog in the flow of seeing different bands.

Intuitively, downsizing a festival seems like a bad thing – just the contrary – the compact setting makes for a much more enjoyable Festival. This led to smart decision number two by the Festival hosts: they didn’t oversell the Festival. Meaning, although there were a lot of music-goers, it wasn’t unreasonable moving around. We were able to go from stage to stage with ease and get comfortable spots to watch all our music interests.

The overall layout is also well organized with the three stages set apart; food trucks in the center; beverage stands and bathrooms all set around the perimeter. Although some of the food lines backed up, the other lines for beverages and “Johnny on the Spots” rarely backed up and wait times were no more than a minute in our experiences. 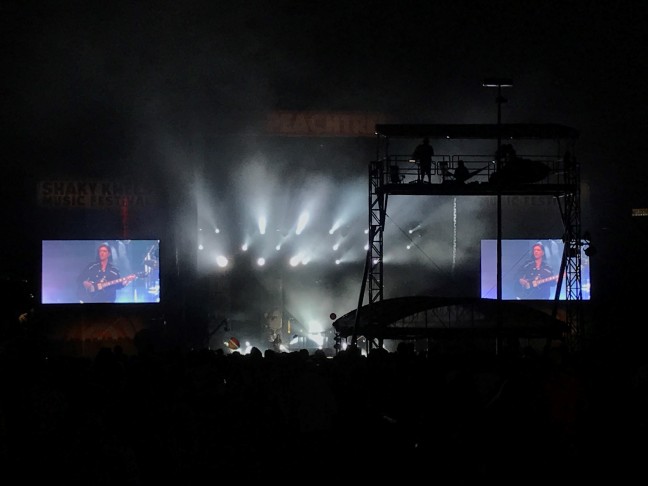 The three stage setup is also nicely crafted with a small, medium, and large variety. The only nitpicks would be adding monitors to the Piedmont (middle) stage for those who hang towards the back. Also some of the overlapping showtimes between the Peachtree main stage would overwhelm the sounds from the Piedmont stage.

The Festival team aptly choose bands to fit the stage venues and this is the third major check-mark of this Festival: the quality line up.

The headliners this year were an eclectic grouping of LCD Soundsystem, The XX and Phoenix. Each put on a great visual and music acts that closed the three festival nights.

Notable standout performances were the energetic show from X Ambassadors –  Sam Harris was unstoppable on stage playing to all parts of stage and crowd.

Dr. Dog also surprised us as we saw them back at Shaky Knees 1. They have definitely matured their sound and music. They have a raw honesty that we have liked in 2013 and the new tracks they played stood out as more dynamic, tighter in delivery and depth.

We also really enjoyed Ryan Adams show. Not only for his endearing humor (renaming his show at one point “the secret Shins’ show”) also his gritty “throw-back” sound that feels nostalgic and comfortable to us Gen Xers.

The highlight of the rising headliners for us is our personal favorite, Moon Taxi. Just hitting 1 million streams of their new single “Two High”, Moon Taxi is headed for the upper atmosphere. We saw them at our first Shaky Knees and several times since. Each time their performance and music is refined and more engaging. The band had people in the crowd moving and singing along with their lyrics. We look for them to headline on the Peachtree stage in the coming year or two (fingers crossed!!)

Lastly, our favorite part of Shaky Knees is the Ponce de Leon Stage for emerging bands and acts. Of all the sets on all three stages we saw this year, the most energy and effort was put forth on the smallest stage. We have follow up reviews of some of our favorites from the weekend:

Look for these reviews to follow over the next couple of weeks and look for us again at Shaky Knees 2018.